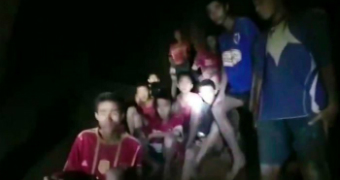 It has been four years since a multi-national team rescued a group of 12 young soccer players from a cave in Thailand, but Australian Federal Police rescue diver Kel Boers still cannot believe it was a success.

Leading Senior Constable Boers was one of the divers called up to travel to Thailand in July 2018 as part of the frantic mission to locate and rescue the boys and their soccer coach, who had become trapped in a cave due to rising floodwaters while on a hike in Tham Luang Nang Non.

The group had been missing for seven days before they were found alive, four kilometres inside the cave.

Quickly realising how difficult it would be to extract the team from the complex network of tunnels, Thai authorities called in assistance from other countries.

Constable Boers first heard about the Thai soccer team’s plight on the news, when it was reported they were believed to be trapped in the cave.

“I remember saying to my wife, ‘oh man, they are screwed. Who’s going to get them out?'” he said.

“I never really even gave it a thought that that might be something we became involved in.”

About a week later, the AFP’s maritime team, of which Constable Boers is a part, was contacted by the Thai liaison officer.

“His question simply was, ‘do you guys cave dive?'” he said.

The team did not have specific cave diving experience but as commercial divers they said they were willing to be a part of the rescue operation.

They were travelling to Thailand the next day.

The Wild Boars soccer team and their 25-year-old assistant coach had hiked in the cave system before, but this time things had gone badly wrong.

A storm had hit while they were inside, flooding a stream at the entrance of the cave.

The youngest among them was 11 years old.

Their belongings were found outside, near the entrance, sparking an operation to discover their location.

Once they were found, the combination of medical experts and divers was tasked with figuring out how they could extract them.

Everyone knew it would be very dangerous for all involved, as the cave system poses a challenge even for the most highly trained divers.

The passageways were narrow and currents strong, with divers forced to pull themselves along slowly, feeling their way along in the muddy water.

There was also the risk that their mask could be ripped off, and in some of the narrower sections, they were forced to remove their gear in order to crawl through.

Constable Boers and his team arrived while the mission to find the boys was still underway.

“I have never seen such a media scrum. A camp had been set up and there was literally thousands of people, their support staff, media, a lot of people from the local Thai community that had come up to cook food for people.”

He said it took some time to work out what was happening and who was in charge.

“And when we finally nailed down the Thai Navy Commander, his comment was ‘I need you in the cave straight away,'” he said.

They asked him what it was he needed them to do.

His answer was, “you tell me what we need”.

It was a formidable task, Constable Boers said.

“I mean, we’ve all done, in my team, penetration dives into shipwrecks or boat wrecks or aircraft and you have some experience, but going into a cave is an entirely different situation,” he said.

He described the water as “black, gross, dirty, silty”.

“You couldn’t see your hand in front of our face,” he said.

“You immediately lose all direction and perspective of where you are because of it.

“And the only thing we had to go by was a very small, thin tagline that had been tied from point to point.

“You have to keep your hand on that as you’re moving through the cave, and if you let go of that you’re in a world of hurt.”

Each dive on the way to where the team was trapped was a different length, some about 10 metres, others more like 400.

At first, their role was simply to support the search for the boys and their coach.

“I think when we got there it was ‘let’s see if we can just find them, first,'” he said.

“And we’ll take it one step at a time.

“There was probably a general belief that we weren’t going to find anyone, and if we did, we wouldn’t find anyone alive.”

But the unexpected occurred, and all 13 were found — thin and hungry, but alive.

The divers assisted in bringing food, water and medical supplies to the team, as work began to build up their strength for what would come next.

By then, the divers had been working in long shifts in incredible circumstances for days, but were determined to see the mission through.

“So we had a day shift and it was pretty much, in the cave by 6am,” Constable Boer said.

“And we’d be lucky if we were getting out by seven or eight o’clock at night, so then you’d have to rush off trying to clean gear and prepare gear and get everything ready to go for the next day.

But they had a problem.

“Once the kids were found and obviously there was a massive amount of elation that they were found and alive, and I think within a minute the question is, ‘how do we get them out now?'” he said.

“So, lots of different theories were run — scuba dive them out, teach them how to swim, all sorts of things, but it just proved to be too difficult and too risky.”

Among the international search and rescue team were Australians Dr Richard Harris and Dr Craig Challen, both of whom had cave diving experience.

The pair became instrumental in solving the problem of how to get the team out.

Their plan was to anaesthetise each boy, dress them in scuba gear and then carry them out through the tunnels on a stretcher.

“Dr Harry” — as the Adelaide anaesthetist is known — played the crucial role of sedating the boys with ketamine, while his long-time dive partner and friend Dr Challen assisted with medical checks deep inside the cave.

The plan was agreed upon by all involved.

‘I was still expecting the next one to be dead’

It took hours to extract each boy from the cave.

“We rehearsed for several hours the day before the anticipated first attempt,” Constable Boer said.

Located in the first section of the rescue operation, Constable Boer would send them off to the next team of divers and be left wondering if they had made it.

“You’re left wondering, ‘well, did he make it the rest of the way?'” he said.

“And you get out of the cave at the end of the night and found out that every boy that came out had been taken to hospital and was well and healthy, it was an amazing feeling.

“I still held that something could go wrong right to the very end because it was just something that was so risky.”

Tragically, one Thai Navy SEAL lost consciousness due to the poor oxygen levels in the cave and died during the operation.

“And when that retired Navy diver did die, it just really hit home to everyone that ‘hey, this is seriously dangerous stuff, let’s lift up our socks and make sure we’re always on our game and let’s make sure we get through this without any other tragedies,” he said.

Inevitably, the mission was successful — each of the 12 boys and their coach made it out alive and were transported directly to hospital.

Dr Harris and Dr Challen were named joint Australian of the Year in 2019 for their pivotal role in the mission.

When the last of the group was safely taken to the end of the tunnels, a cheer went up among the group.

As they began the process of removing all their gear from the tunnels, pizza and KFC were brought to them to celebrate.

“It was like a party atmosphere, sitting with men that I’ve never met before eating soggy pizza and KFC and just so excited about what we achieved,” Constable Boer said.

He said the mission remained the highlight of his career.

“I can honestly say, into the future when I’m no longer a police officer, it’ll still be a highlight of my life,” he said.

“It sounds like a cliche, but that’s why I became a police officer, so I can help people, and to have that experience is incredible.”

He said the team of AFP divers did leave Thailand having learned one lesson — to ensure there was a clear leader of any operation, even when the prospect of such a role might be daunting.

“Somebody has to put their hand up and make the decision,” he said.